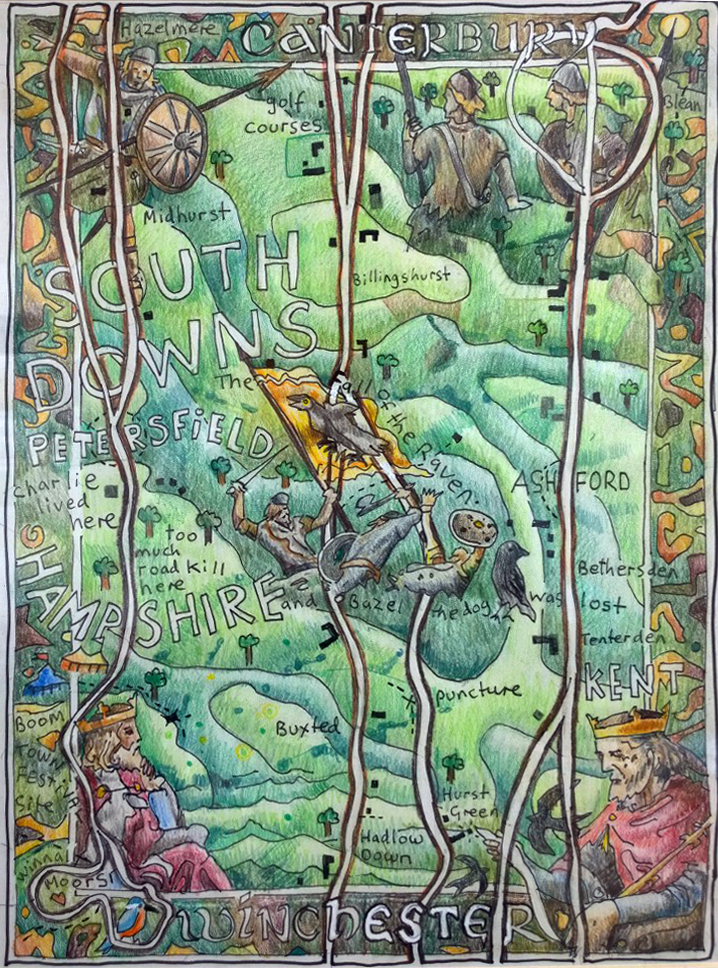 This is my final blog post, the last of my map/travelogue explorations, bringing my residency at the Beaney in Canterbury to an end. Actually I think it is the beginning of my explorations really, the start of an inner journey of some kind. Some kind of exploration into map making and my own creativity! Canterbury must be the capital of such inner journeys or Pilgrimages.
Pilgrims are people in motion – passing through territories not their own, seeking something we might call completion, or perhaps clarity. A goal to which only the spirit’s compass points the way.

Winchester to Canterbury is the famous Pilgrims Way. But I’m not trying to recreate that, or bond with  fellow pilgrims on a common quest. Though I am interested in Winchester as it has been a special place for me since childhood.

So I decided to ride my  by bike from Canterbury to Winchester and back on my own personal pilgrimage. People say about journeys that it’s not the destination it’s the journey, but on a bike in the rain it does very much become all about the destination as the journey becomes the wet slog in between two places. I jest, as maybe the rain added to the experience.

The reason Winchester seems such an important place in my mind is for three reasons;

1) King Alfred The Great was buried there. He is high in

my personal understanding of the world. Because a
s a small boy as I had a Ladybird Book on King Alfred illustrated by John Kenny, who it must be said is responsible for my early years development. His illustrations are instantly r
ecognisable to me now 40-45 later. King Alfred one of the historical figures in history illustrated by him is as vivid in my mind
now as it was when I was  ten. All my ladybird history books seemed mainly about crazed despots building empires and conquering people all over the world; people like Alexander the Great, Napoleon, Walter Raleigh, Julius Ceaser, Richard the Lion Heart and William the Conqueror. Somehow Alfred the Great was more about peace and unity and less about exploitation and expansionist greed. Something seemed different about his story, he was more about defence, not attack but became  founder of a United Kingdom. This as a boy of ten seemed unusual.

2) Winchester was the first place I went without my parents, my aunt and uncle took me there when I was a very young for a couple of days. Felt weird but significant.

3) I created a sculpture Trail there which was one of my favourite commissions during my working life. I worked with The Hampshire Wildlife trust for nearly two years and got to know Winchester quite well in that period. I wanted to see how the sculpture trail which is on a nature reserve on the outskirts of the city had weathered 2-3 years after completion.

So I took my tent and rode my bike there, sleeping in fields and woodlands.

The top three best moments of the trip in reverse order:

3) Walking around my sculpture trail on Winnall Moors. Remembering the good times.

2) getting out of my tent at 9.50 am in the morning, having been inside it for about 15 hours. Eventually the rain stooped and I could move on.

1) My breakfast directly after no.2 at the Waterside Cafe in Hurst Green. Full English followed with a cream tea.

A map of my ride to Winchester and back. Coloured pencil A4