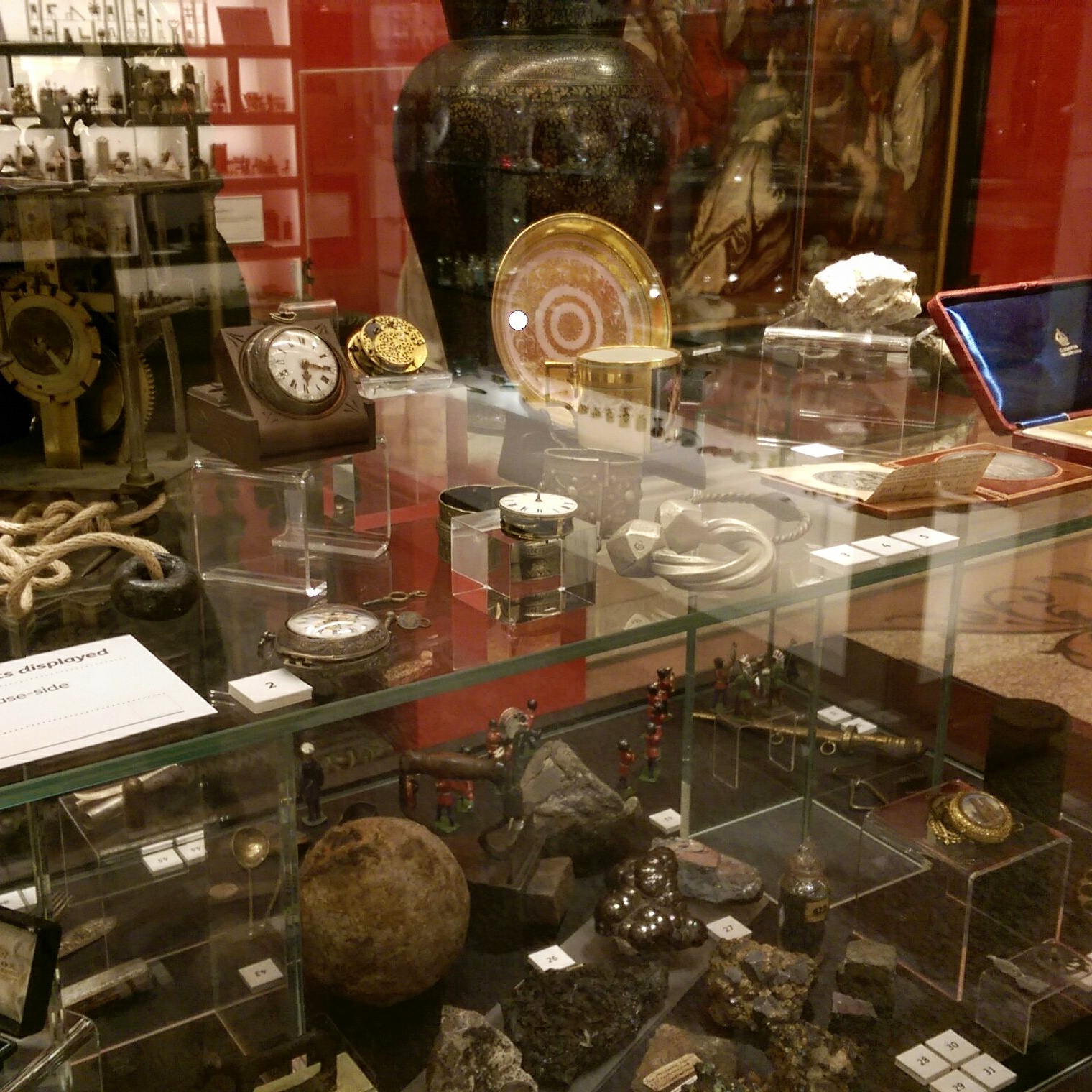 To coincide with Grayson Perry’s exhibition The Vanity of Small Differences, the Beaney launched their Cabinet of Small Differences as a companion piece that questions the role of objects and consumerism in today’s society. The cabinet showcases artefacts from a bygone age inviting us to reflect on their contemporary relevance. For example, the Japanese concept of Yokai / Mononoke, the ‘spirit/soul of things’, reminds us that it was once considered that objects had souls. But now as that belief has mostly vanished, we have become “enslaved by materialistic fashion to believe in discontinuity” (Quoted from The Cabinet’s introductory text). As objects are too easily replaced, maybe we lose out on developing a long-lasting fondness or attachment to the things that we own and use. The cabinet raises questions about the value of these artefacts now that their usefulness has gone – do they still contain their Mononoke, or are they just forgotten relics from the past?

In my previous blog post, I highlighted three specific lines of enquiry that my residency is exploring – Museum, Artefact, and Modes of Display – and these will eventually unify to establish a spatial narrative unique to the Beaney. Having already begun working on a series of drawings that explore the building fabric, I am beginning to consider what it is that actually qualifies as an artefact. Generally speaking, an artefact is considered a product of manufacture, or something made by human hands. A historical item contained within the different museum collections, or any of the pieces contained in the Cabinet of Small Differences, for example. These things were considered and then created and are, therefore, artefacts. The introductory text for the Cabinet of Small Differences questions whether we leave anything of ourselves with the objects when they are made, used and discarded, but also questions the lack of soul in modern artefacts. I overheard one conversation between two visitors, where one said to the other that she had bought the same teapot as one on display as a gift for her mother.

“Back then it wasn’t old-fashioned” she had said.

This particular artefact evoked a nostalgic response, releasing an emotional energy. The visitor was reminded of choosing it and giving it as a gift to a loved one. If the soul is generally considered the immaterial part of a human being or an animal, or even an emotional/intellectual energy, then arguably to evoke the same energy requires the object to also contain it? The teapot stimulated an emotional response, therefore, this teapot still has its Mononoke. I am attached to my favourite mechanical pencil and would rather refill it than replace it. When I use it, I can recall all of the work I have ever made with it.  Perhaps artefacts, including those that are made today, still have their Mononoke? Whether you believe in the concept of the soul or not is a different matter, but nostalgia, or emotional energy, may exist within each artefact and could be the reason we are drawn to them.

At this point I would like to mention that I am drawn more towards the natural objects in the collections rather than the typical artefacts that I have mentioned. Technically speaking, where an artefact is the product of manufacture, geofacts (geological objects) and biofacts (biological objects) are products of the natural world. Their production comes from natural processes that repeat themselves, but produce different results each time. For instance, you can find three different examples of Fluorite in the displays of the Colour and Camouflage room. Fluorite is a crystalline formation that is formed from an eruption of hot water containing fluorine, from deep within the Earth. As it comes into contact with other calcium-rich geologies, crystals of Fluorite begin to form in their typical isometric cubic habit. The process is the same, but because of the materials they come into contact with, the structures that they form and the colours that they become differ each time, hence the three different samples. In the Masters and Materials room, there is a piece of Ropey Obsidian which is formed from the fast-cooling of volcanic magma. This contrasts with the smoother Black Obsidian that can be found back in the Colour and Camouflage room – both are formed from the same process but because of their different situations, each has taken on a completely different appearance. I am drawn to the geofacts in particular because of the organic processes that created them. They are outputs of a set of circumstances. While their aesthetic appearances may vary, the processes are what defines them, much like my own practice. I combine intuition with structure and allow a generative language of geometries to be guided by an inherent spatial instinct. The first mark of a drawing is heavily considered, but every subsequent mark after that becomes a response to the former. My drawing language and my intuitive instincts are my processes and circumstances, and the outputs change each time.

Returning to the notion of Mononoke one last time, there are an infinite number of tales from Eastern and Western folklore that speak of the spirits of nature, they too are imparting themselves onto their biological outputs, much like mankind and its artefacts. Perhaps I am detecting an emotional energy in the geofacts that I have become so fond of, and that is what keeps drawing me in? Whilst the truth in the soul of objects may be impossible to confirm, part of me likes to believe that it is somewhat true. I like to think that there is a strong, emotional bond that develops between a person and their belongings. With each visit to the Beaney, and each time that I sit down to draw, my bond with the collections is growing. Like my first live drawing event, Phase.01_Museum, I will be producing some new work during my second live drawing event, Phase.02_Artefact, on Friday 16 December. Although I have identified three distinct aspects that I am exploring within my residency, it is impossible to completely separate them because they all exist in relation to each other: artefacts and biofacts are displayed in different situations, contained within a set of spatial boundaries. To explore one aspect is to pull in information about another. Artefacts have their histories, and geofacts have their processes and they all have their souls. Be sure to join me as I try and translate this information into a new drawing.