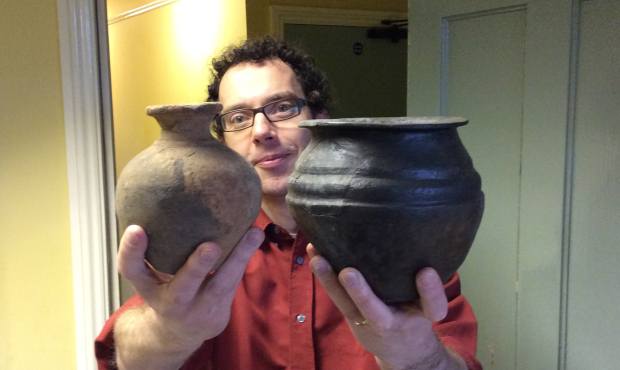 We are back with our regular feature ‘Crag carries’ where our Collections Manager, Craig Bowen, showcases the objects he is currently transporting around our museums before they go on display.

This week Craig has been carrying… Iron Age Pottery

Dating from 50 – 100 AD this assemblage of handmade pottery is known as Beligium grog tempered ware. It is so-called because the clay was mixed with small pieces of detritus such as pottery, flint and shell, known as ‘grog’.

This type of earthenware was first produced before the Roman invasion of AD. 43 and continued in use for a hundred years or so afterwards. Made by the Belgae people who had fled from France to Britain after the Romans invaded, the pots have distinctively Belgic patterns. Vessels such as these were widely distributed in southern England, especially in Kent.

Belgic carinated cup excavated in an archaeological dig at Whitehall road in the 1950’s.

The pottery is currently on display at Canterbury Heritage Museum.