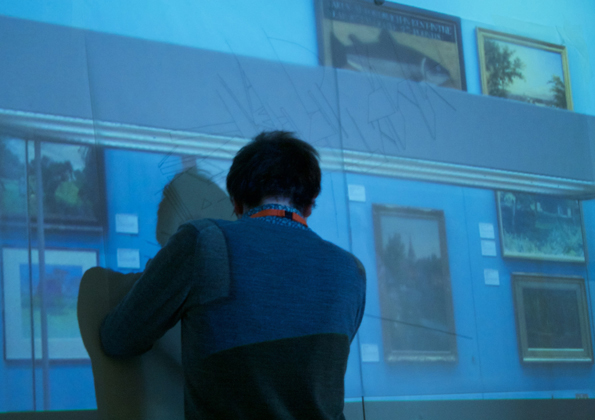 As part of my residency, Friday 14th October saw me hold my first live drawing event in the Beaney’s Learning Lab. By projecting footage of the Beaney onto the wall and drawing on top of that, I was able to create an image that was influenced entirely by the building’s spatiality. But for the live drawing event to happen, the first step was to document as much of the building as I could and thankfully, I was allowed in before opening so I could get plenty of footage.

Having visited previously for drawing sessions (and all the other times over the years), I already had a good idea of the spatial qualities that I wanted to capture – the ornate staircase, the beautiful ceilings, the large warm rooms, The Garden Room and where I used to sit (see previous blog post) – so I was able to record everything that I would need to influence an interesting drawing. With camera in hand, I walked the space and traced all of the details with the lens and memory.

However, being a gallery and museum, there were other details that I was unconsciously recording at the same time, and it wasn’t until I watched the footage that I became aware of this. It turns out, that you can’t record the space of a museum without recording the artefacts contained within, and the ways in which they are curated and displayed: these all contribute to the spatiality of the Beaney. The three notions of ‘museum’, ‘artefact’, and ‘modes of display’ cannot be separated because they all exist in a state of symbiosis. Because of this one act of filming, I have immediately become aware of three lines of enquiry that my residency will continue to explore: The Museum and its building fabric, The Artefact and its sense of temporality, and Modes of Display and their unspoken control of space. By separating these qualities, I am beginning to establish a methodology to understand this institution. I am creating a network of information that is continually changing, that allows for continual development and interpretation. As I think and draw about it, the network shifts and expands and continues to draw in new information, meaning that each drawing I produce is a snapshot of this multiplicity, and is only definitive in the moment that it is created. Each step in the live drawing event is a temporal snapshot of this multiplicity. Memories of The Beaney from ten years ago that led to the making of a film four weeks ago, which then led to a live drawing event two weeks ago. A chain of events that has led to right now and beyond into the future – I now know that two more live drawing events will be coming.

The first live drawing event was largely successful: I was able to create a drawing representative of Museum, in a format that allows for people to come along to watch and talk to me. My objectives are starting to emerge, so be sure to look out for the next event when I begin to explore notions of Artefact.