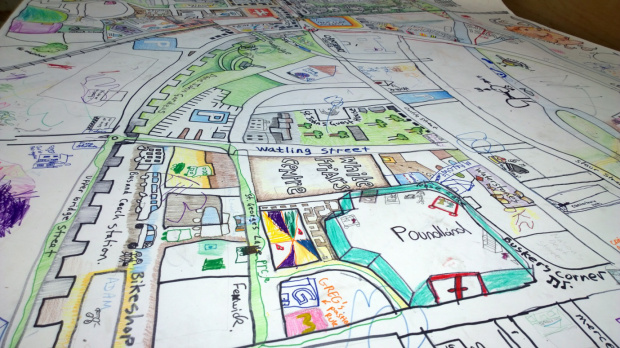 Made through a series of open workshops at the Beaney.

Rob Turner is currently the Resident Armchair Artist at The Beaney in Canterbury.

The second workshop coincided with another event at the Beaney that day and it was busy.  I don’t remember a point during the day where it wasn’t being worked on. It was so busy I had to step back and release any thoughts of control, as the saying goes people were ‘all over it like a rash’.

One part of me is the maker of a detailed map, another part of me is providing cultural exploration with the public, so what can you say in front of group of people, to a family whose young toddler has just found out they really really like big fat permanent markers! They have never been allowed to use anything quite so fantastic at home before. Really fabulous crawling in and out of other people making lines and coloured areas with intuition and self expression connecting to some kind of inner drive never discovered before. It’s like the lines that come out, and my arms are the same thing. If I want to crawl over to that red bit the line follows me there…fantastic. It comes directly out of my hand and if I want to sit here and just build up a nice area of strong colour it does that so well…Such satisfaction…

“ Mum come here, Look I want to show you how marvellous this thing is, look at this…. swish…swash ……..swoooosh it does exactly what I say.”

So  I watch as part of this child’s personal development unfolds in front of me, instead of jumping up snatching the pens out of the child’s hand and saying ‘don’t just let them just scribble all over it’.

Another highlight of that session was watching a slightly older map maker go shopping in Poundland. She decided Poundland was as close to the centre of Canterbury as she could make it. She drew big, red, bold entrance doors that really stood out, went through and moved around the shop drawing as if she were actually shopping in there. She started with looking at some dresses on these hangers, a particularly nice mauve one.  Then she moved onto looking at these racks and shelves…

“Are they right for my bedroom?  Oh, I particularly like the t-shirts on this rail. Oh my basket is filling up nicely and getting heavy.  And look at these candles on this table…ahem… Look at that green bag, yes I’ll have that, oh I will just have one last look at these clothes on this rail to see if there is anything to go with my new bag…and then I’d better go.”