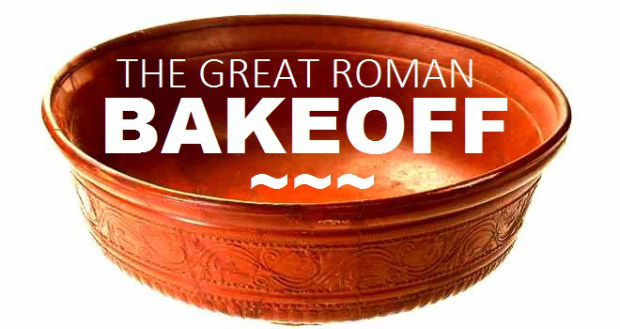 In honour of Britain’s favourite baking show returning to our screens tonight, Canterbury Roman Museum brings you three recipes from Ancient Rome for you to try at home: a signature bake, a technical challenge and a showstopper. Ready, set…BAKE!

Libum is an over 2000 years old cheese-based bread used in ancient Rome, often offered to Jupiter during wedding celebrations or to other deities during sacrifices.

This recipe comes to you directly from Apicius’ De Re Coquinaria (‘On the subject of cooking’), a roman cookbook dating from the 4th or 5th century AD that is now one of our principal sources on ancient Roman cuisine.

As sugar was not available, honey was often the sweetener of choice in Roman desserts. The recipe for these biscuits uses traditional flavours like nutmeg and cinnamon, and honey to add sweetness, in true Roman style.

Here at the Great Roman Bake Off no one is going home this week. However, do make sure to serve all your bakes in an authentic ancient Samian dish for the true Roman Bake Off experience.

You can find out more about Roman everyday life at Canterbury Roman Museum, open daily 10am – 5pm.