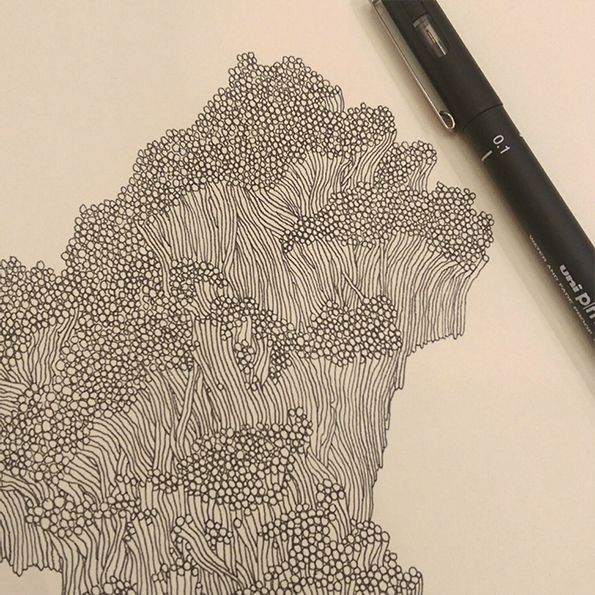 I have become increasingly infatuated with the biofacts and geofacts that are on display in both the Masters and Materials room and the Colour and Camouflage room (biofacts being biological objects, and geofacts being geological objects). As I mentioned in my previous blog post, I appreciate that each one is different despite being produced through the same processes; the same set of organic protocols that define what it is regardless of the difference in visual appearance. Think of the Great British Bake Off, people bake a cake following the same recipe, but its likely that there will be some differences between each one at the end. The recipe, or, process, that each biofact/geofact is created through is the same, but the outcome is always different.

My own practice functions in the same way, and employs its own set of processes in order for me to create my work. I combine intuition with structure and allow a generative language of geometries to be guided by an inherent spatial instinct. Each time I make a new drawing, the first mark on the surface is heavily considered: I decide the thickness and colour of the pen, the location on the page, the size and shape… And once it is made, the second mark becomes a response to the first. This is where intuition kicks in so that whatever happens after that is purely responsive to the mark before. To understand how these intuitive thought processes actually work, take a look at Daniel Kahneman’s Thinking, Fast and Slow. In it, you learn that the act of thinking happens through two distinct systems, simply named System 1 and System 2.

“System 1 operates automatically and quickly, with little or no effort and no

sense of voluntary control… [And] System 2 allocates attention to the

effortful mental activities that demand it”

Walking, talking, eating – these are all examples of System 1. Driving for the first time, baking a cake, talking in a second language – these are all examples of System 2. The difference is that walking just happens and you don’t have to think about how to do it, whereas with driving for the first time, you have to pay attention to what you are doing and how you are going to do it. When I first started creating my work, or, when I first started using my language of geometries, I had to focus on what I was doing. It took a conscious effort to decide how each line and shape would form on the page, and how the next would relate to the previous. But as with any System 2 action, use it enough and it becomes so natural that its execution becomes a System 1 action (it requires barely any mental effort at all). In which case, my language of geometries has become so commonplace that it no longer requires a degree of conscious control – my System 1 can consider it for me. System 2 therefore is freed up to think about the overall outcome and what the drawing is achieving.

The processes that I employ become methods of design-thinking, and allow for my work to emerge more organically. Exploring the natural objects at the Beaney has allowed me to re-establish a more considered control over my drawings again, which in turn, could potentially be the evolution of a new drawing language. I am using their natural processes and overall form to generate each new drawing. In doing so, the language is beginning to change, and the way in which the drawing constructs itself is beginning to change whilst still embodying the same intuitive qualities, and this evolved language will become a tool with which I can reach a spatial conclusion relative to The Beaney. Artist in Residence, Dan Tollady, will be in The Beaney Learning Lab this Friday from 1 – 5pm for his second live drawing event. Come along and find out how his residency has influenced his practice whilst seeing his latest work being created.