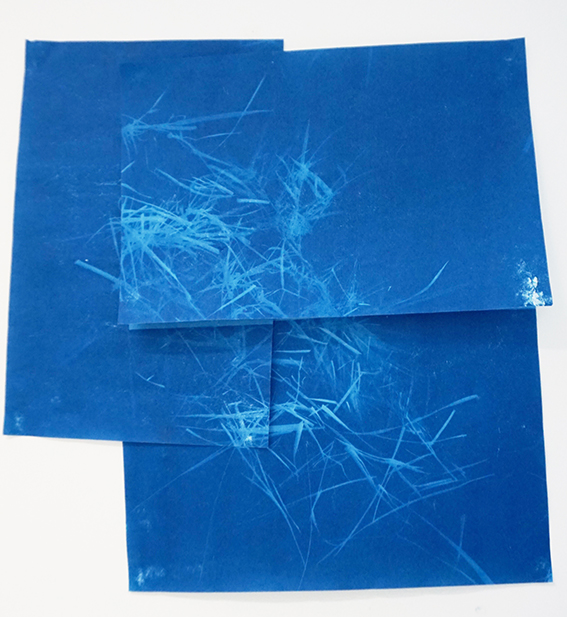 The fifth in a series of blogs by Beaney Armchair Artist in residence, Kathleen Herbert.

Whilst waiting for an elusive sunny day to start experimenting with the cyanotype process, I continued my research into Anna Atkins. What I have discovered and something that appears to be common with many female figures over the centuries is how little information there is on this great pioneer. What is known is she was born in 1799 to a wealthy Kent family. Her mother died when she was young and her father, a respected Scientist John, George Children, raised her. Sir John Herschel, who invented the cyanotype in 1842, was a family friend and a regular visitor to the Atkins family home at Halstead Place in Kent. As a keen artist and botanist it can be assumed that Herschel’s new invention requiring a few chemicals, light and water gave her an opportunity to explore botanical illustration in a new way. The image and form of botanical specimens became described by their silhouette and impression.

Cyanotype is a time-based medium and this concept of time runs through from process to impression. The subject laid to rest on the paper leaves an impression; this imprint is a residue, of something that is no longer there. Within today’s environmental context of climate change, Anna Atkins seaweed impressions remind me of extinctions past and present.

Finally my sunny day has arrived and so has my cyanotype kit. I have decided to start experimenting using a kit, as I do not have a darkroom to mix and apply chemicals onto paper.

My first cyanotype is a test to decide the exposure timings. Carefully removing the light sensitive paper from the thick black plastic bag, I lie the paper down onto a flat surface. Over lapping the paper both horizontally and vertically I grab a handful of grass nearby and sprinkle it on top of the paper. As the instructions said leave exposed between 1 min and 4mins depending on how bright it is, I take a punt and decide to expose the image for 1min 30secs. Once exposed I quickly scooped up the papers, head indoors and immediately place the papers in a water bath. Gently dipping them in and out of the water slowly washes away the blue surface and reveals the unexposed areas. Each time the paper was dipped into the bath so more detail within the image was revealed. The results were a deep indigo blue background, the blades of grass of varying hues from blue to white, zigzag, dissecting the papers creating a sense of depth and form. The image reminds me of the sensation you get when snorkelling. Feeling submerged the water suspending your weight, being present floating in space, looking into another world/time.

After what I feel was a successful first experiment with cyanotype, I decided to develop the process further through the objects that I wish to record. I have talked in past posts about my practice using 16mm and super 8 mm film and the photo-chemical process. I thought it would be interesting to make a portrait of light, a reflection of the process. So with this in mind I decided to rip open a super 8-film cartridge case and expose the film onto the cyanotype paper, with the intention of exposing not just the paper but also the super 8 films.

Using the same timings as my first experiment I lie the paper down on the ground, whip out the unexposed super 8 film and set the timer on my phone. Unfortunately the wind picks up and blows a sheet of paper from its original position. This unforeseen anomaly is reflected in the final image and once again I get a beautiful indigo blue background. The reel of film scribbles the surface of the paper. Further investigations with the film are less successful in terms of its colour. I used a new batch of pre-treated paper and the same exposure times. For some reason the papers blue chemical washed off when placed in the water bath and I lost the deep indigo tone. However, compositionally these further two cyanotypes work better. Whilst I await more pre prepared paper I turn my attention to the exposed super 8 films, which have now been sent off for processing. I have to wait a month before they are returned to me developed, then I can project them alongside their cyanotypes. I am intrigued by the concept of captured light on a certain day at a certain time; a timeframe rather than an image.